Moomins and the Finns 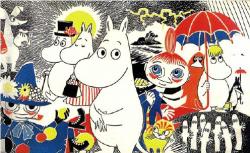 For us Finns Moomins are very close to our heart, at least for me. The first time I met the Moomins on the TV. It was the “Muumilaakson tarinoita” (Stories from the Moominworld), series that Japanese had done. I don’t know how old I was, maybe something like 3? Less? But I do remember that it was my favorite TV show. As long as I can remember also my parents liked to watch it with me. That’s very understandable, I would still love to watch it all over and over again. I could do that by watching the VHS tapes where we recorded the episodes so that I could watch them whenever I wanted.

Oh, in case you don’t know what are the Moomins I’ll tell you now. So, it’s a story that was written by Tove Jansson, one of the most well known Finnish writers (or at least as a Finn I think so, correct me if I’m wrong). All in all she wrote nine books about the Moomins, together with five picture books and a comic strip that was released between 1945 and 1993. I tried to read those books when I was maybe 13 and I had a lot of time to read books but I didn’t quite manage. They seemed too boring for me back then.

In the story there is many fictional characters. The most important ones are Moomintroll [Muumipeikko], Moominmamma and Moominpappa, the moomin family. Then there’s also Moomintrolls best friend Snufkin [Nuuskamuikkunen] (me and my mom’s favorite character), the always a bit scared Sniff [Nipsu] and a mischievous tomboyish little girl Little My [Pikku Myy]. Then there is also the sisters, Snork Maiden [Niiskuneiti] and the Snork [Niisku]. And oh so many other characters.

The story tells about the residents of the Moominvalley and their adventures. It has been written by Tove Jansson and besides the TV series there has also been some movies about it.

The second place where I met the moomins was the Moomin World in Naantali. I went there at least for four summers in a row when I was less than 10. There you were able to speak and see the real moomin characters and meet them and have fun with them. Because of this experience I still get very surprised when I hear that some Finn hasn’t gone there during his or her whole life! Unbelievable, don’t you think?

During my adultish life the moomins are still part of my everyday life. Right now all my hand towels have moomins printed on them and of course I have at least twelve moomin mugs, one of them here in Vaasa. I’m kinda collecting them. It’s mostly because if someone asks what you want for present it’s always easy to say that: “Buy me a moomin mug. Here’s a list from the ones that I already have.” (Or at least this is what I say to myself so that I don’t seem like a crazy collector.) Of course I’m going to put moomin wallpaper with Snufkin on my spareroom and gonna have a whole bunch of new moomin mugs and maybe a lamp and definitely some more towels and curtains and and.. But let’s not go to that any more. (For you to know, I know even worse moomin addicted people than what I might seem like.) If you want to know more about what I have been writing about and see what the moomins look like, here’s a link to a YouTube video where you can see the first moomin episode and start your life with the lovely moomins: https://www.youtube.com/watch?v=puT_HmM8YdQ.