13+ finnish food you have to try before going home 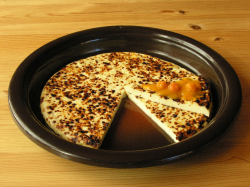 Today I will introduce you the finnish food culture. I don’t know if I’m the most qualified person for this, but I guess you’ll judge that!

I come from Italy and I have been living in Finland for two years in total and in this time I have experienced some of the finnish delicacies and typical foods. Let’s start with the fact that I’m not that kind of Italian who is strict about how and what to eat, unless you put pineapple on pizza. I’m very open to new tastes, and recipes from other countries just thrill me no matter what. So, let’s start with this list of foods you should definitely taste before going back to your home country:

Leipäjuusto It’s a type of cheese, the literal translation is “breadcheese”, it’s quite soft and fresh, it’s served with lakkahillo, in english cloudberry jam. You can find these two foods in almost all the finnish supermarkets.

Makaronilaatikko If you have been in the university restaurants you probably met the traditional finnish macaroni casserole. It´s made by mixing macaroni pasta with minced meat, egg and milk, it can be served with ketchup. It’s a very loved dish that you can find in all Finland, it’s very cheap and easy to make.

Hernekeitto Translation: peasoup. Usually served on Thursdays with pancake and jam and/or whipped cream. You can find it in cans in the finnish supermarkets, the ingredients can vary but green peas, meat (usually pork), spices and onion are the basic ones. Also this dish can be found in the university restaurants in some Thursdays, so keep your eyes open if you want to try it!

Lohikeitto You won’t be able to find a more lovely summer dish than the finnish salmon soup. Although it’s mostly a summer dish, you can find it also in the winter, so hurry up and go try it. The ingredients are salmon, mixed vegetables, potatoes and food cream. I’ve met finns who say there is no cream in it; if you’re a finn and you’re reading this, help me solve this mystery. I’ve tried making it myself and it’s not that hard to follow the recipe. Served with rye bread and butter.

Karjalanpiirakka (+ munavoi) This is personally my favourite finnish food so far and until the end of time. I’ve made these rice pastries at home several times and I always buy them for a snack since I tried them the first time during my exchange. They are funnily shaped and served with an egg and butter mixture. When I was in Italy and got visits from friends coming from Finland I always ask them to bring me those. They are the best thing ever. Now you know my weakness.

Poronkäristys A little more difficult to find, you’d have to go to a restaurant to find this dish. It’s sautéed reindeer usually served with mashed potatoes, pickled cucumber and lingonberry jam. It’s a very traditional dish from the Lapland and very worth a try, however it can be a bit expensive.

Glögi Finland is a cold place. This probably doesn’t come to you as news. But! Finnish people have the best ways to face the cold: radiators, warm clothes and glögi. Yes, glögi goes together with the most basic winter requirements, don’t ask why. By the way, it’s mulled wine, so it’s known also in other countries, but I tried it for the first time during a trip in the Lapland, and never understood how I lived all my life without it.

Mustikkapiirakka Once again, you can’t miss this. I know, I probably look like a finnish food fanatic by now, but this pie is THE best thing. Together with all the other best things I just listed. Also this one is easy to make, I’ve made it myself and the result was… just look at the picture and tell me you’re not in craving mode already. I’m not a fan of sweet stuff, but this is heaven. Just. Believe. Me. (That picture is actually mine, I’ve made that pie two summers ago).

Mämmi Yeah, well. Let’s talk about it. It’s an Easter traditional dish, and it’s not like every finnish food can look and taste awesome, right? :D The first time I tasted it was in the city tour organised by the tutors, two years ago. I thought it was made of plum and I liked it. I tasted it again less than a month ago, and… well, you go taste it and you tell me about it ok? Just remember to put the vanilla cream that goes with it. Leave a comment in here or on the facebook post to let me know what you think. I’ll just go to the next dish already.

Lätty, lettu, räiskäle (a beloved child has many names) This is the finnish children (and adults) treat. It’s a flat type of pancake, served with jam or whipped cream, or both. When I was au pair in a finnish family the kids wouldn’t stop asking for more and more, and I still haven’t really nailed the recipe of this one, maybe it’s because I don’t ever put enough butter.

Kaurapuuro The name might make you think that this is some kind of monster but it’s just porridge. In Italy we don’t eat it, so I grew used to eat it in Finland but I can’t say that I love it that much. Finns instead are very fond of it, so of course it needed to be in this list.

Korvapuusti What do you need after a day at work or school with a good cup of coffee? Obviously a cinnamon bun. What about when you don’t have school or work? A cinnamon bun. Yes, a cinnamon bun is always the answer. I’ve made these several times, and once I served one to a finnish friend who gave a bite, and with a very still face said “it’s good”. I started to think I did something wrong, the bun was disgusting or too dry or not fluffy enough. Then she said “it’s like the ones my grandma makes”. I wanted to smile and jump excited all over the place, but I just replied “thanks” with a still face (or at least I tried).

Ruisleipä (+ juusto) At the beginning of your exchange you go buy the rye bread to try it and you promise yourself you’ll never do it again. Then you learn how to put butter and cheese on it, sometimes you even toast it, and your life changes, you only eat that in days and lose a lot of weight and feel happy and satisfied. Story of my life.

Now it’s your turn! Have you tried any finnish foods? What did you like? And what did you hate?