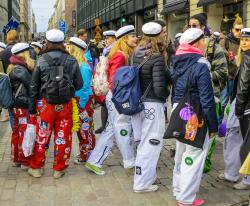 You probably have seen the normally colorful overalls that we students wear here in Finland. And the way we love to sew patched in theme (or maybe the sewing part isn’t our favorite part). You might have even bought yourself a pair of ones, from us or someone else and if you haven’t you can still buy (at least from us).

The students normally use their overalls in different occasions but mostly that occasion has something to with partying or celebrating. For example here in Vaasa you can see overalls the most when there’s some student party happening in the evening and where students are allowed to use the overalls (you’re not allowed to use them always). Also Vappu, which is a big student event also (it has other meanings too) the normal clothing is their overalls and some kind of hat.

You can probably find all the colors from the rainbow in the overalls. Here in Vaasa you can see that some HEI use the same colored overall for all students, and in other HEI’s the color is decided by each organization ordering them. ESN Vaasa is the only organization in Vaasa using orange, which is one of our official colors as well. Aren’t they marvelous?!

Students also want to cover their overalls with patches. The patches are normally from events where they have been, some organisations logos or something completely different. You can find Moomins or some nice clever memes.

There’s many ways how we students attach our patches on our overalls. Sewing is probably the most popular way but some patches you can also iron and some (maybe a bit lazy ones) use glue, however it has a tendency of not lasting so long.

The way you attach your patches or the color your overalls are doesn’t matter. Of course we want you to get ours ;) But the most important thing is probably that you feel proud and that you belong somewhere when you are wearing those probably colorful overalls.

Now you can get ESN Vaasa overalls! They cost 20€ (very cheap!!!) and you just have to send us a message and ask when you can try a pair!